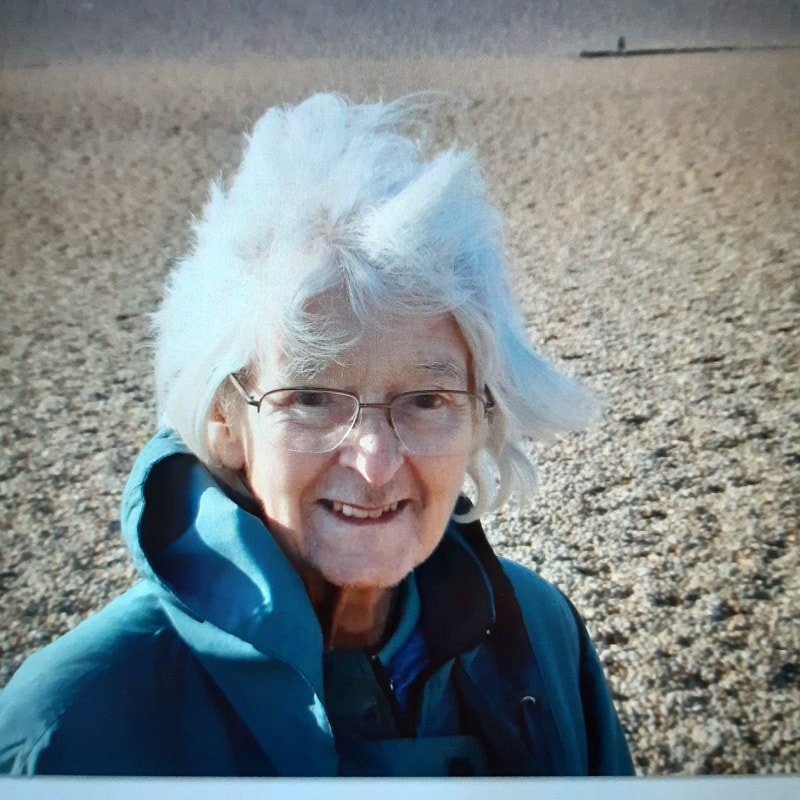 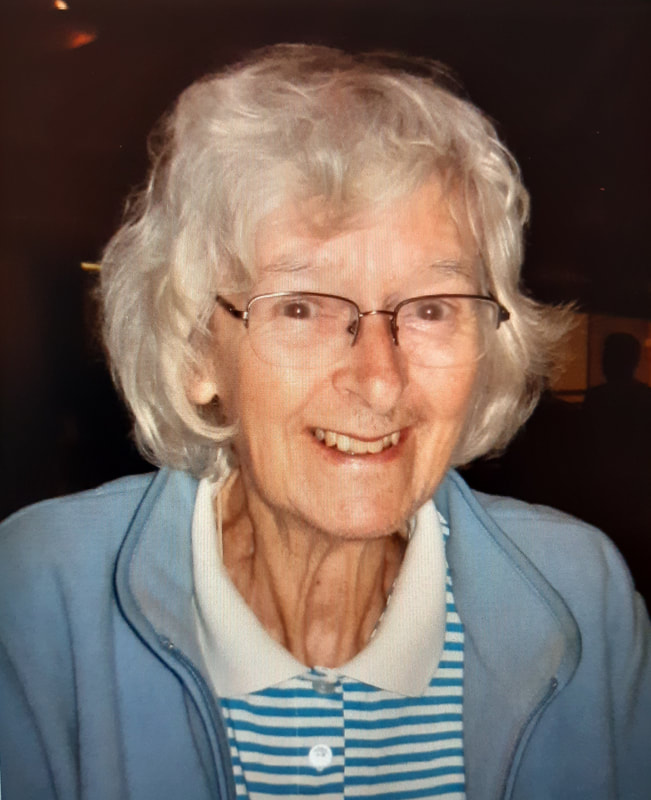 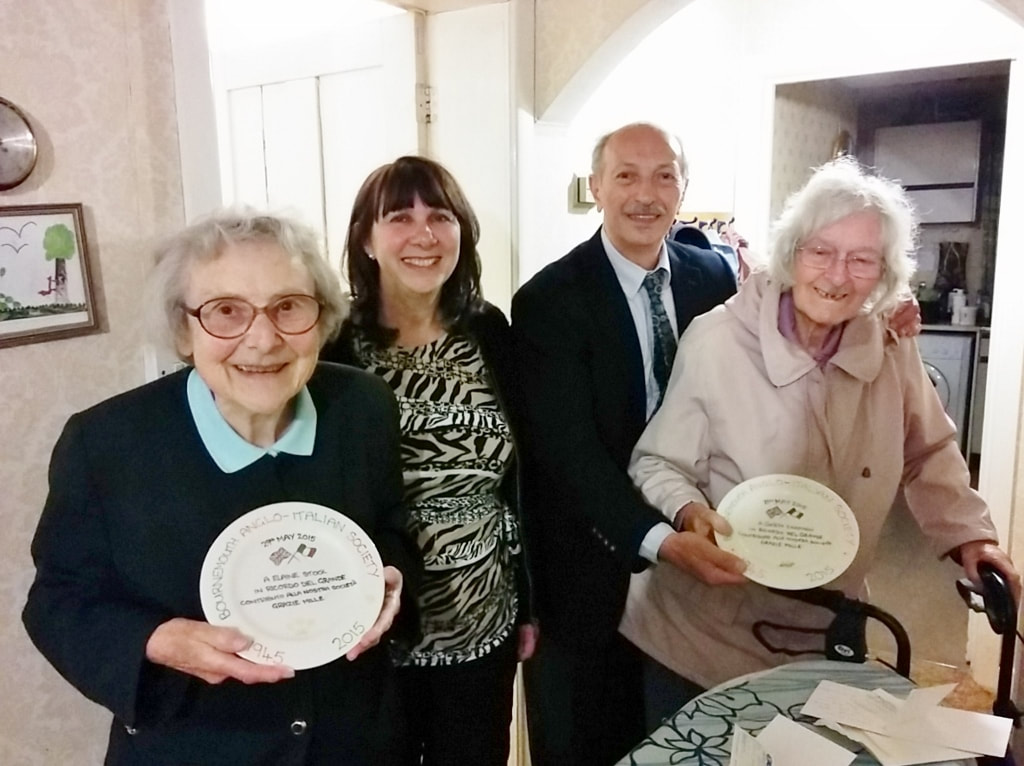 Presented with commemorative plates on their "retirement" 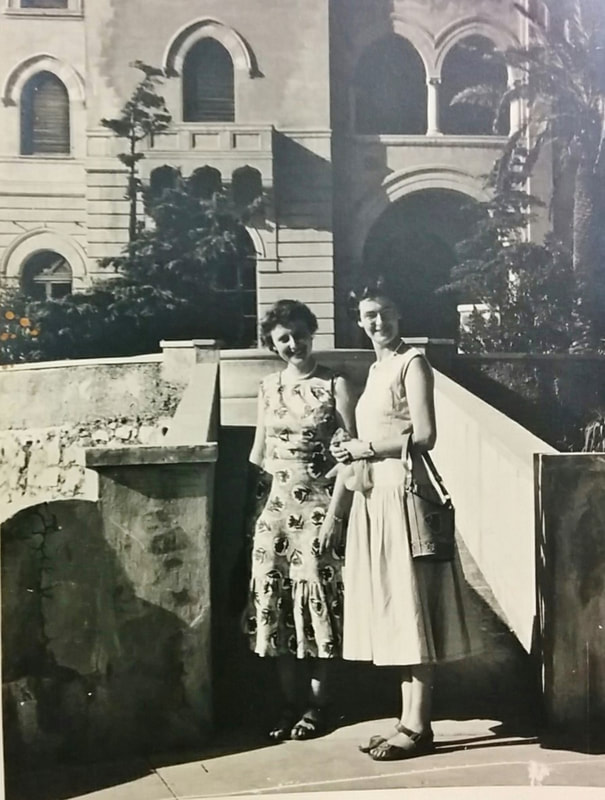 A few days before Christmas we received a letter with the sad news that our friend Gwen Chapman had passed away peacefully on the 9th of December at her care home in Poole.
Gwen was 94 year old.  Apart for the last couple of years in Canford Chase care home and a period in London while training to become a teacher, she has lived in Poole town in the same house where she was born.
Gwen had many interests in her life: photography, gardening and rambling to name but a few, but Italy, Italian language, opera and Italian holidays were her great passions. She shared the love for Italy with her life-long friend Elaine. They became friends at infant school when they were five years old, both qualified as teachers and remained best friends all their lives. Together, for decades, they were the backbone of the Anglo-Italian Society, having been involved from the early 1950s. Gwen provided help to Elaine in running the beginners class and was later the Chairperson of the society and finally, she almost single-handedly prepared and assisted the refreshments in the refectory at the end of lessons.
Gwen, together with Elaine, several times gave fascinating illustrated talks on their favourite subjects, from Thomas Hardy's Dorset to the Italian opera houses.
A special memory remains of Gwen and Elaine's incredible picnics. Gwen used to drive a little Nissan car that was used to accomplish the amazing logistic feat of providing a summer picnic for all members and friends, packing it with tables and chairs and all kind of food and drinks. It was a really miraculous enterprise that everyone looked forward to at the end of the summer term.
Gwen's green fingers in gardening were well known; every year she donated numerous tomato plants that she had grown for fun in her home greenhouse (apparently she didn't even like to eat tomatoes!)
For the Christmas Festa, Gwen and Elaine used to organise a pantomime. They wrote the script using familiar Italian words and expressions and managed to convince many courageous members to dress up for the parts and deliver the clever puns. This tradition has sadly stopped when they stopped writing the scripts and making the props; nobody could do it the way they did it!
Gwen and Elaine continued their involvement with the Anglo-Italian until 2015 when, as the Society celebrated its 70th year, they decided to hand over the baton. They continued however to inspire their successors, and their spirit lives on.


My personal recollection of Gwen goes back to 1995, so I consider myself a newcomer to the Anglo-Italian Society. It was Jessica, who was already attending classes at the Society, that let me know that they needed someone to help with the conversation class, because a lady called Patricia who was running the class found it difficult to attend every Tuesday as she lived in Wareham and was rather busy.
Although I was at that time busy with my full time work and often on-call and with three young children, I thought it would be a good thing to get involved in some Italian language teaching. Jessica and I arranged to meet the then chairman and vice chairman of the society, i.e. Gwen and Elaine, at Gwen's place in Denmark Road in Poole, not far from where we live. My interview for the job must have gone well because those two charming ladies managed to persuade me, albeit with the help of a glass of wine, to take on the class. And I am still doing it after 25 years!
It soon became apparent to me that Gwen and Elaine were the embodiment of the Anglo-Italian society, the perfect mixture of English polite humour and Italian passion for food and music.
This perfect union was especially on show at the society's Feste when everybody contributed to the refreshments and wine (Italian of course) was on offer. The Christmas party was something special, when Gwen and Elaine's pantomime was the main protagonist, involving a good many members. They must have worked so hard at it!
After their “retirement” from the Society, at the end of May 2015, we organized a special musical evening in their honour at St Joseph church hall, with the late Patricia Bonelli and her Opera Company performing extracts from Italian famous operas. They loved it, and it was the least we could do to thank them for decades of commitment to the Society they loved.
We kept in touch with Gwen even after she stopped attending the Society and subsequently moved to a care home near Westbourne. Her lifelong friend Elaine, who had also moved to a care home due to ill health, passed away in 2019; fortunately Gwen was able to attend.
We last saw Gwen at her 94th birthday that she celebrated with her family. She looked well and remained in good spirit. Unfortunately, due to Covid-19 pandemic restrictions we were not allowed to visit her any more, neither could we attend her funeral on the 29th December.
Gwen will remain in our thoughts and we will always keep her memory alive in the Anglo-Italian Society.